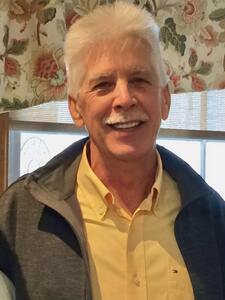 Gary R. Keefer, 68, of 144 Elysburg Road, Danville (Riverside), died suddenly at his home on Wednesday, December 29, 2021.
Born in Bloomsburg on December 27, 1953, he was the son of the late Raymond and Dorothy (Newbury) Keefer. He has spent his life in the Danville / Riverside areas and graduated in 1971 from Danville High School. He then graduated from the Milwaukee School of Engineering.
Gary was employed by Geisinger Medical Center for 36 years, before retiring in 2015. At the time of his retirement, he was Director of IT and Telecommunications.
He was of the United Methodist faith.
Gary loved to bowling and had a perfect 300 game. In his youth he competed in Little League Baseball. He was a fan of Bucknell’s sports, especially the basketball team. Passionate about golf, he scored a hole in one shot. On his 50th birthday he traveled to Ireland to play golf. He followed the baseball teams of his nephew and his great-nephew.
He was a long-time member of the former Danville Elks Lodge. Gary was also a member of the Continental Fire Co. and the Friendship Fire Co. in Danville. He was an avid Dallas Cowboys Football fan.
Besides his parents, he was also predeceased by a sister, Dolores Croker and a brother-in-law, Daniel Doyle.
Gary is survived by three sisters: Barbara, wife of Jim Beshore, Bloomsburg, Sherry Doyle, Atlas and Debara, wife of Michael Chyko, Bloomsburg (Lightstreet); 10 nephews and nieces and 22 grandnephews and nieces.
The funeral will be on Wednesday, January 5, 2022 at 11 a.m. at the Bloomsburg Christian Church, 107 Deussen Drive, Bloomsburg, with church pastor Eric J. Miller officiating. The family will welcome friends from 10 a.m. to 11 a.m.
Gary loved pets and may be remembered by friends with a contribution to one of the following projects: Danville SPCA, 1467 Bloom Road, Danville, Pa 17821; PA PETS, 203 E. Fifth St., Bloomsburg, PA 17815, or the Animal Resource Center, PO Box 439, Bloomsburg, PA 17815.
Arrangements are in the care of Roat-Kriner Funeral Home, 1133 Bloom Road, Danville.
Messages of condolence and photographs can be displayed at: www.krinerfuneralhome.