Isabelle (Koh-Lanta):My disability put me on the sidelines

The first disabled candidate of the Koh-Lanta adventure show, Isabelle Haouzi, hearing impaired, was eliminated this Saturday, May 23, 2015 after 15 days in Malaysia. The 50-year-old looks back on his experience, his deafness, his

H.fr: You are very hard of hearing; so explain to us how you can hear me on the other end of the line.
IH: Indeed, I have a digital device in-ear (discreet, it slips inside the ear canal, ed) that allows me to call without worry. Finally, with one exception: I must move away from the handset and put the speaker to avoid feedback.

H.fr: You did not experience your handicap until very late …
IH: Yes, I took a lot of time to take care of myself. I felt that my hearing was gradually deteriorating and that I began to become dyslexic, which, moreover, made my entourage laugh because I answered by the side of the plate when they asked me a question (laughs). It was only between 35 and 40 years ago that I had a hearing aid. Yet I already had two deaf people in my family.

H.fr: What do we feel when we find the use of a meaning?
IH: It’s beautiful! Of course, I was attacked in the early days, but now I am lost without my camera. And, important thing as a teacher of modern jazz, I found a better balance.

H.fr: What made you decide to apply to participate in Koh-Lanta ?
IH: I think I’ve been watching the show since its first season. I like adventure and, frankly, I saw it. Also, it was important to me to represent the deaf community, community that is dear to me. It’s been a few years since I registered but it never materialized because I was always very busy. Except for this season!

H.fr: Have you received the support of your loved ones, and especially that of your three children (aged 33, 30 and 23, ed)?
IH: I admit that they were a little surprised when I told them the news. Even if the reaction of my second boy was more nuanced because it is very protective, everyone was very happy. It was a little harder when I left for the island but they said they felt a lot of pride. And then they knew how to find the words to cheer me up when I came back … 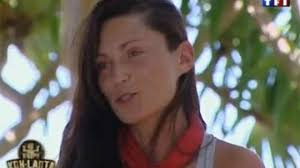 H.fr: Tell us your first impressions before jumping into the water to reach the island.
IH: I was in it! There is a little apprehension at first because we do not know where we are going but I felt like a child who discovers Disney!

H.fr: Have you decided to talk immediately about your handicap to your teammates?
IH: Exactly, it was useless for me to hide it from them. In the late evening, I removed my camera and I wanted at all costs to avoid that they say to themselves “But what’s she doing here?” If I ever did not answer them. I felt a great respect from them for my deafness. There has never been a word about it.

H.fr: Do you find that being hard of hearing has served you?
IH: Yes, I think. I do not hear as fast as others and when the conversation is long, I sometimes lose the thread. I shut up a little.

H.fr: In addition to being the only disabled participant in competition, you were also, at age 55, the dean of the show. An additional “handicap”?
IH: I was proud to be the dean! After, necessarily, it’s not easy; I’m not 20 anymore. Being a woman played too. I am not a force of nature as can be Bruno despite his 52 years but I think I had the potato compared to some young people who were sometimes more tired than me.

H.fr: Which feeling prevails: the satisfaction of having stayed so long or the frustration of having been eliminated so quickly?
IH: Very sincerely, I am proud of my journey. It is a very beautiful therapy that allowed me to understand many things about me. Since then, I have found more calm, serenity. Participating in Koh-Lanta was better than I imagined. If I had a regret, it would be that of not having had enough time to make me known. Many people did not like Moundir (candidate in 2003, 2009 and 2014, ed) during his first participation and have since changed their minds because they know more about him. I think I’m in the same situation as him at the beginning.

H.fr: One of the candidates described you as “Calimero”. Did it touch you?
IH: It hurt me a lot, it’s true. But I forgave Margot without problem after she apologized to me. It did not affect me more than that; I know where I come from. I have overcome everything in my life, I am a dance teacher despite the fact that I am hard of hearing … And then, I know who I am, I have a heart in gold, I am a positive person.

H.fr: If we offered it to you, would you go back?
IH: Ah, I say yes right now! Especially that I would have the experience of my first participation.

H.fr: What would you do differently?
IH: I’ll be faster. At first, we do not really know how to be, if we have to say such things or not … I’m not a very strategist and I think I learned to be a diplomat too late (laughs).

H.fr: We know that participating in a reality show can be a stepping stone to the small screen. What will happen to you?
IH: That creates cravings, actually. I would love to play an advertisement for a hearing aid or work as a dance teacher on TV. I am a big fan of Dance with the stars! I’m waiting for something to be offered to me A wordy (laughs). After, I also have another project that has good chances to materialize.

H.fr: What is this project?
IH: With the association “Mieux vivre” (which created the French School of Sign Language, editor’s note) , of which I am a member, we would like to put on a dance show with deaf and hard-of-hearing people for July 2016. I am in fact being trained at the LSF in order to be able to communicate with them more easily. It remains to write a synopsis and find a room in which to repeat but the idea begins to make its way.

H.fr: It is customary for each new person arriving in a group of deaf to be given a sign. Which one is yours ?
IH: They name me with the sign “smile”. A positive sign, like me (laughs). I am not “Isabelle smile” for nothing!

Prev post Bruno Le Maire would make disability his great national cause
Next post The draft law on disability from Tuesday to the Assembly.