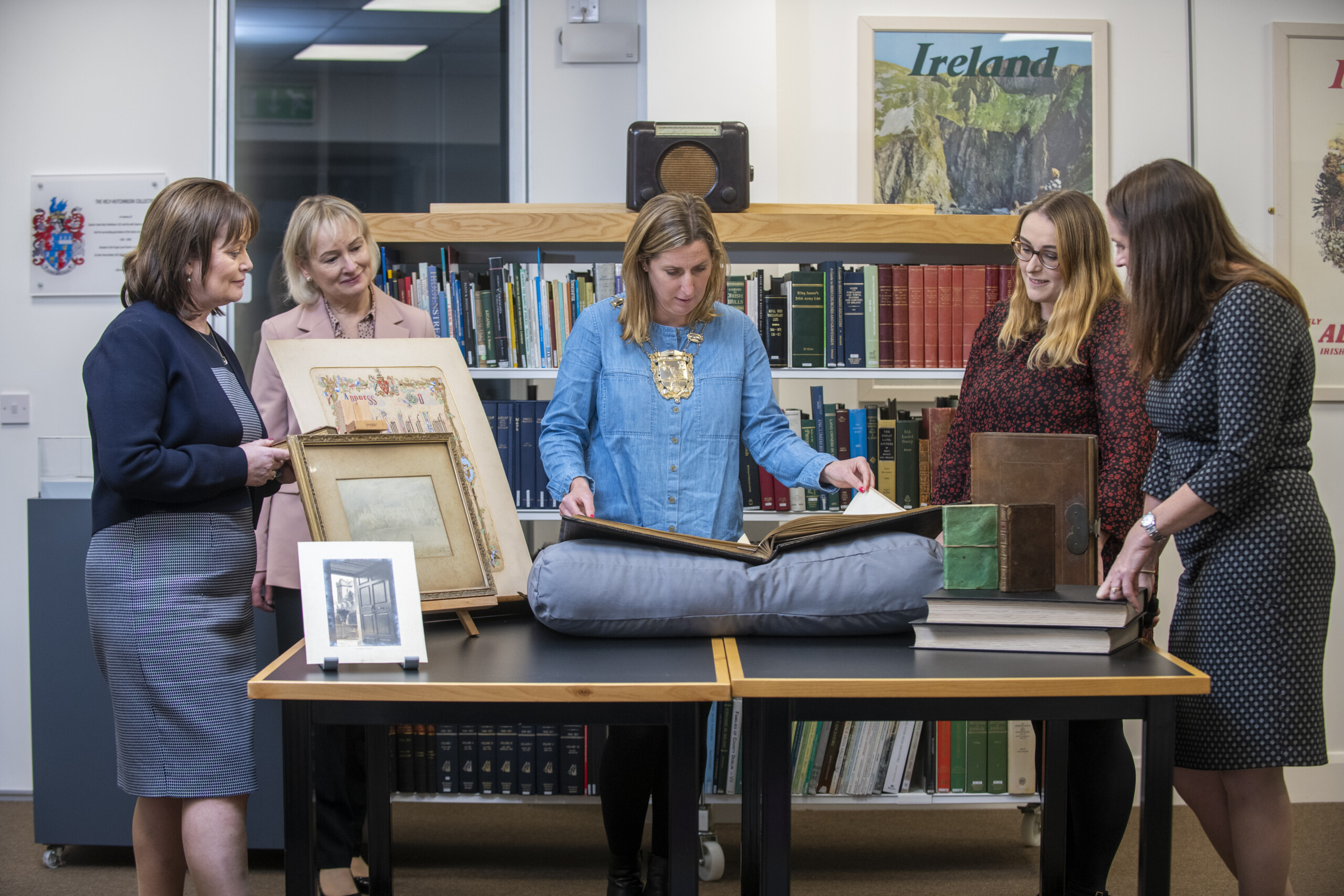 Fingal Local Studies and Archives announced details of a number of significant acquisitions from the Howth Castle collections.

Following the sale of the castle and estate in 2018, the contents of the castle and its library were auctioned in September 2021, marking the final chapter in the family’s 800-year history with the Howth Peninsula.

Sir Almeric Tristram, the first Lord of Howth, came to Ireland with John de Courcy in 1177.

Legend has it that on the feast day of Saint-Laurent he won a victory which secured him possession of the Howth Peninsula and in gratitude for this he took the name Saint-Laurent.

In 1767, George III bestowed the titles of Viscount St. Lawrence and Earl of Howth on Thomas, then Lord Howth. In 1909, the last Earl of Howth died and his nephew Julian Gaisford inherited the castle.

These include The Earl of Howth Estate Atlas, a handwritten atlas produced by Hodges, Smith & Co. in 1863, which contains over 20 hand-colored maps with details on each field of the estate and the names of the tenants. .

The Howth Castle Rent Book dates from 1766 to 1780 and contains 140 pages of handwritten inscriptions of tenants, the rents they paid and the amounts owed. An illuminated address, illustrated by illuminator J. Hopkins, was also obtained and sent on behalf of the tenants of North Dublin County to the Earl of Howth on his father’s death in 1874.

It is signed by nine of the tenants.

These three elements alone are extremely important as sources of local and family history in North County Dublin.

Fingal Local Studies and Archives also acquired almanacs from 1765, 1775 and 1776 as well as an 1840 edition of The Antiquities of Ireland by Francis Grose.

At the auction of the contents of Howth Castle, we acquired a pencil and watercolor drawing by George Petrie “Howth Castle” dated 1819, a watercolor “Ireland’s Eye” by Frederick Lawless dated 1879, a original watercolor by Francis Grose “St. Mary’s Abbey, Howth”, as well as 6 original hand-colored Dublin views by James Malton and several photographs of Howth Castle.

Fingal Mayor Cllr Seána Ó Rodaigh said: “I am delighted to see Fingal’s local studies and archives acquire these important historical artifacts from the Howth Castle auction. They are beautiful documents and they will be of great interest and become a valuable resource for historians passionate about local history.

AnnMarie Farrelly, Executive Director of Fingal County Council, said: “These articles from Howth Castle, in particular the Atlas of the Earl of Howth’s Estate and the Howth Castle Rent Book, are extremely important acquisitions for our Fingal Archives and will be a fantastic source of information about life on the Howrh Estate and the families who lived and worked there. It is in keeping with our priority as a Council to protect our heritage that we can now preserve these elements of historic value and make them accessible to the public.

Fingal’s local studies and archives acquire, preserve and make available historical records relating to the county. The domain of Howth Castle was and is of enormous importance to the Howth Peninsula. These articles will go a long way in advancing knowledge and understanding of the history of the Howth Castle Estate and Howth itself. The service welcomes all those interested in the local, family or social history of Dublin, with particular reference to Fingal and can be contacted at [email protected]