Blind Cycling: The Climb of Ventoux in Tandem 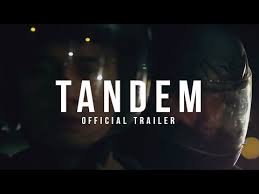 “Tandem”, a brilliant documentary, traces the ascent of Mont Ventoux by Jérôme, blind, and Guillaume, his team-mate, keen on cycling. To watch on the occasion of the arrival of the stage of the Tour de France at Mont Ventoux on July 14, 2016.

“Before embarking on this adventure, I did not even know that Mont Ventoux was the Mecca of cycling,” confesses Jerome Adam, smiling, in Tandem , the documentary that traces his rise in tandem with Guillaume Buffet. On June 22, 2015, the two teammates faced 1,800 meters of elevation gain to reach the summit. Jerome and Guillaume are producers of the series J’en crois pas mon yeux (JCPMY), whose episodes depict, with a lot of derision, the most comical situations in order to educate companies and the general public about the issue of disability. at work (link below). Very touching, Tandem details, in 26 minutes, their training, their joys and their difficulties during this very special challenge.

From personal challenge to collective adventure

At the origin of the project, a kid’s dream; Guillaume Buffet, passionate about cycling, wants to travel the 22 kilometers that lead to Mont Ventoux, whose summit exceeds 1,900 meters above sea level. The idea of ​​a tandem climb offers an additional motivation that finally convinces Jérôme, his team-mate, who has been blind since he was 15 years old. In a week, the file is mounted while a crowdfunding campaign necessary for the realization of the documentary is launched. “By making this film, we could make this challenge a collective adventure,” explains Jérôme. We wanted to give people fishing. “

All different in the face of the unexpected

What do you feel when you pedal at this level without seeing the scenery? “I had an impression of real pleasure and sharing, I felt surrounded by people who encouraged me, says Jerome . Conversely, Guillaume sometimes felt oppressed. Physically, I was not surprised by the difficulty of the effort because I trained hard for six months. ” Meeting with a sports coach, stress tests … Everything is related in this positive and stimulating video. The management of the unforeseen, thematic often addressed during conferences given in company by Jérôme, is also put forward. “Whoever is supposed to be the strongest is not always the best equipped to handle the unexpected,” he says . During the ascent, we both had to work our letting go in different situations. I had to trust him in terms of mobility, orientation; Guillaume could have more trouble in case of supply problems .

Carry team spirit in a company

Tandem , so it’s a story both sporting and human. A challenge sublimated by Henri Poulain, perfectionist director, who did not hesitate to use the big means – drone, camera on board, long focal length – to end up with a very cinematographic film, with the images of a bluffing quality. Just a dose of humor and emotion, Tandem , for sure, would have its place in an adventure film festival. If extracts were taken by some TV channels, the documentary is mainly intended to be projected in a professional environment. “To confess one’s limits, to have a team spirit, to put forward complementary skills … That’s what I try to convey during my work in the company,” says Jérôme. Disability is managing everyday constraints. It makes you stronger, more able to handle unexpected situations.
After an initial broadcast in June 2016 at a computer giant, which organized before the projection a “Day of Digital Accessibility”, the documentary will be screened in large companies in the fall. Available on Youtube (below), the film could inspire more than one …

Prev post On France 3, Wahiba, blind, is not cold to the eyes!
Next post Bruno Le Maire would make disability his great national cause

9 ways to get money to start

Take care of your finances